The Satellite Ecosystem Entropy (SEE) visual analytics webapp is a Space Domain Awareness (SDA) capability that provides strategic and operational space operators an “ecosystem” perspective for space objects of interest. SEE identifies ecosystem activity transitions which represent fleeting opportunities to compete below the level of armed conflict. The SEE webapp does this by measuring space ecosystem and resident satellite entropies continually in order to make decisions which advantage one player over another. 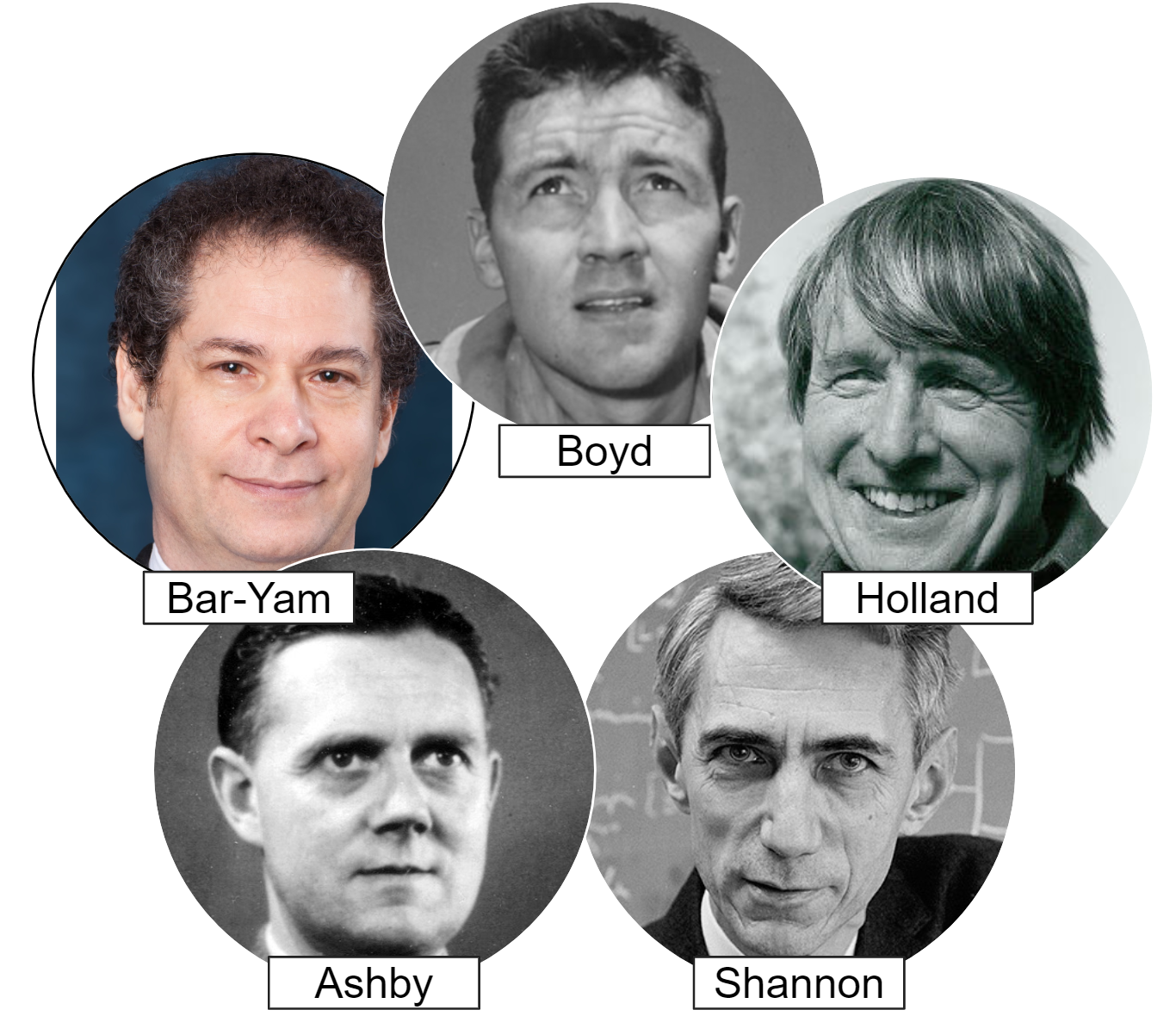 This capability operationalizes an aspect of complexity science by synthesizing the research from several noteworthy thinkers.
Prof. Yaneer Bar-Yam asserts that historical statistical tools are simply not sufficient for today’s analysis needs; moreover, he mentions that entropy is, in fact, a measure of system complexity. United States Air Force COL John Boyd defines entropy as the ability to pursue goals and uses the work of Heidegger, Gödel, and the 2nd Law of Thermodynamics to support his claims. Ross Ashby is most well known for developing the Law of Requisite Variety.  Ashby also observes that complex systems change so dynamically that insight generation capabilities must be always processing data and serving up insights; in an ecosystem of interest, therefore, the very most recent observations have the best opportunity to predict what is likely to happen next. Claude Shannon developed Information Theory and a simple entropy calculation, which we use in this capability. Finally, John Holland asserts that complex system boundaries are constantly forming and dissolving; moreover, Holland asserts that simple building blocks do an adequate job of defining complex adaptive systems.
Bringing it all together, our capability is an “always on” predictive insight tool built using temporal entropy measures derived from process building blocks and recent activity which identifies boundaries and opportunities for fast, good enough human or machine decision making.
What is Entropy?
Entropy is a measure of chaos or order or “surprisal,” which can be used for persistent monitoring, alerting, and decision making based upon recent and historical activity. Our entropy measures are rooted in Shannon’s Information Theory and complexity science. Shannon’s information entropy, which is related to the physical properties of thermodynamic systems, describes the variety of activities or state of possibilities within complex systems. Given the possibility of many different activities in a dynamic system, it would be a very surprising result if only one activity is observed (low entropy); conversely, it would also be quite surprising if all possible activities are observed equally (high entropy). Our process technologies calculate both ecosystem and individual entropy measures derived from process event logs. Used in tandem, these measures enable powerful near-term, predictive decision making.

The SEE tool relies on identifying satellite maneuvers. We did this by adapting an algorithm developed six decades ago.

In the aftermath of Sputnik, a frequently cited 1963 paper by Southworth and Hawkins proposed a distance function between two orbits — Statistics of Meteor Streams. The paper ended up being heavily cited because it allowed (back in 1963) the clustering of asteroids and meteors from their two line elements (TLE), in order to determine their origin from different ancient parent bodies that had fragmented eons ago. The paper asserts that a much better distance function would be a delta-v, which was hard to compute in the early 1960s:

“An excellent measure of the difference between orbits, if it can be found, is the amount of perturbation that will transform one of the orbits into the other. A perturbation of an orbit arises from an accelerating force applied for a period of time; hence the velocity change so arising is the natural measure of the perturbation. In general, no single perturbation can suffice because the two orbits will not intersect; we may expect that an appreciable difference between a pair of orbits that were once the same will normally be the result of many perturbations. Since D comprehends all orbital elements, it appears possible that D is a measure of total perturbation; we must determine, however, whether the different elements may be so combined. We consider an idealized model for orbit change, postulating random vectorial increments dV to the vectorial orbital velocity Vh of a meteor.”

Southworth and Hawkins derive a trigonometric-based Euclidean distance between meteor TLEs. Rather than looking at meteor streams, we adapted the technique to examine perturbations between satellite TLE observations. We use this algorithm to examine single objects in a time series; changes in the abstract orbital distance measure between observations suggest the addition of power (aka delta-v). After adjusting for time differences between observations and converting the results into a logarithmic scale, we observe orbital power differentials between 10^-6 to 10^1.

What does “Fast Power” Mean?

We call the metric “Fast Power” because:

Lower measures imply “closeness,” but it is closeness in abstract energy/fuel space, not physical space.

A terrestrial example might help. Imagine two cars. One is five miles from home, and the other is ten miles from home. The first car is on an unimproved back road; the other is on an interstate. Compared to 5 miles on a dirt road, 10 miles on an interstate may actually be “closer” in energy space or fuel (power) space. We are examining ways to compute the close “energy neighborhood” around objects of interest in order to examine the processes of approaching objects.

Because there are very few measures less than 10^-5 and greater than 10^-2, we binned the each “Fast Power” measure according to the exponent values as follows:

TLEs are collected daily. Although they are not the most accurate, there are massive amounts of historical data readily available, which is critical to creating ecosystem patterns of life, since these patterns can emerge across varying time scales.

Process event logs are created which combine these data. The figure below contains an excerpt of the GEO belt satellite meta catalog. The “Country,” “Mission,” and “Slot” contexts enable additional analyses other than a single satellite pattern of life. Not only do these contexts provide more data which in turn increases statistical confidence for decision-makers, they also deliver insights which would otherwise be unavailable. For example, country-level analyses may reveal unique or emerging tactics, techniques, and procedures (TTP). Likewise, orbital slot analyses may identify different tempos unique to certain slots. Orbital slot pattern of life models may also be used to identify objects with POLs statistically different from the majority of objects in the slot.

Satellite Ecosystem Time Series Entropy represents the variability of categorical process activities within an ecosystem at a particular moment in time. Also characterized as the average level of “information”, “surprise”, or “uncertainty” inherent to possible outcomes.

All recent ecosystem process activities are counted and normalized as a percentage of the total. If a process activity did not occur in the time period, the last process activity performed is used. Daily ecosystem entropy derived; last observed maneuver is considered active for the purposes of calculating entropy on any given day. If appropriate, different time intervals may be used: ie monthly or hourly window.

where p(i) is the normalized statistical percentage of a process activity (i) at a given time interval (ie month, day, or hour)